“It was something relatively new a few years ago, now it’s everywhere. Every studio has a 3D printer.”

Get an inside look into the EFX industry as veteran Makeup FX Artists Steve Yang and Eddie Wang from Alliance Studio discuss how 3D printing with Raise3D has shaped the new era of Special Effects and sculpture creation.

Alliance Studio is an entertainment design and build studio.

I moved to L.A. to get into the makeup effects industry.  This was a time when the movie The Thing had come out already, American Werewolf in London, The Howling. These were huge innovations in makeup effects. I was lucky enough to get in with Stan Winston Studios when I first got here and work for him for a few months.

Then I went to Rick Baker’s as a sculptor for Harry and the Henderson’s. And I think, it wasn’t until shortly after that I met Eddie, He was, what, 17? And I was introduced to him- Here this kid, he’s really amazing, he’s really talented, and wanted to meet you.  So, I met with him, and instantly we hit it off.  We’ve been friends ever since, and he taught me. 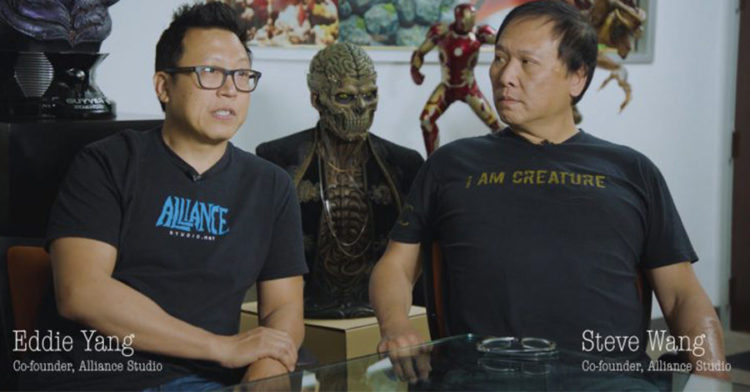 Steve had this completely unique way of doing things.  At the time everything was kind of humanoid. It was what kind of, we call a kind of “safe design.” It was monsters paint jobs. Purples. Fleshy tones. Everything was kind of done in a very boring fashion. And then Steve shows up, monster maker contest with this hermit crab inspired, sea creature amphibian paint job with this samurai kilt underneath, and everybody was like,

It hit all those elements. Everything we did in the industry was started with clay. We do maquettes, we just do our final products always done in clay. And since I slowly moved out of the makeup effects arena and started getting more into creating statues for video games. 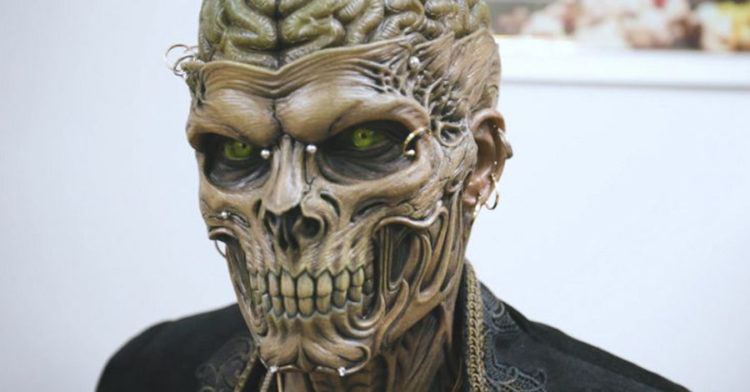 The first one I did was for Blizzard back in 2004, and it wasn’t until 2010 when they came to me, and they had this giant robot guy named Jim Raynor, a guy in the robot suit and they show me the 3D model and say, “We want you to make this.” At that point, it was totally different from what I’ve done before. Before everything was done traditionally, and now I’ve got this giant robot. And so that’s the first time that I really got into digital. Digital printing is a huge part of what we do now.

“Digital printing is obviously catching on; it was something relatively new a few years ago and now it’s everywhere.  Every studio has a 3d printer and is doing something because it just makes so much more sense.”

It’s so much easier and it’s one to one. You design stuff on the computer digitally and you get exactly what you want. The first printer we ever bought was a Makerbot, but it was too small, and we needed something bigger, we need solutions. So, we started researching into larger printers, and we looked at every company.

I think we were on a tour of Blizzard Studios when Brian Faison said you should look into Raise3D and I didn’t know what is was the first time I heard it and sure enough we contacted John over at Raise3D and he had a printer here ASAP.  He rolled it out of the truck, plugged it in and showed us and that was pretty much the history.  You know with the Raise3D, obviously a bigger build space, faster, also a higher resolution, we were able to actually take some of the parts we’ve done for the big life-size statues.  We print them, take them to the back and clean them up and do a regular finishing on them and you really can’t tell the difference between that and the parts that we actually farm out to the big printing companies. You do one job; it pays for the printer. 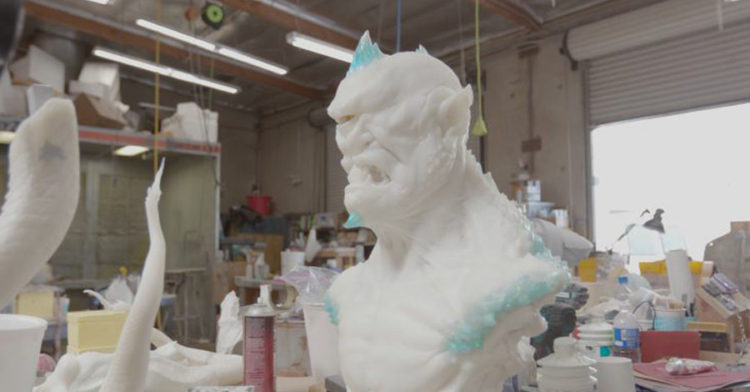 Oh yeah, the price was a huge thing because the ones we were looking at were two and three times more than a Raise3D printer. When we asked, “Ok how much does this cost?” and we said, “Ok so I guess that this is a no-brainer.”

As artists, and being creative every day, we think of unique ways of utilizing this technology and the machinery.  We can do things that we have never done before.