The E2 is a desktop 3D printer meaning it is a smaller machine. Having a small-scale printer like the E2 is practical in schools because it does not take up too much space and can easily fit on a desk. While the E2 is a desktop printer, it has a large enough build plate (330mm x 240mm x 240mm) for students to create different types of projects. For example, Year 6 students created a mini green screen and used it for stop motion animation film production. 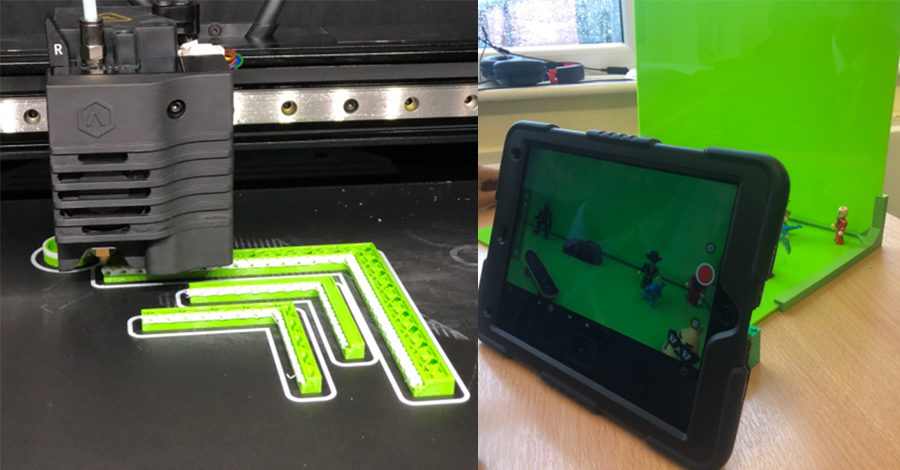 One of Winstanely’s favorite features of the E2 is printer’s IDEX (Independent Dual Extruder). IDEX enables students to perform more advanced functions on the E2. For example IDEX enables the E2 to perform Mirror Mode and Duplication Mode. Mirror Mode prints a model and an inverse of that same model at the same time. Duplication Mode is synchronized printing, meaning it uses both extruders to print a model and an exact copy of that model at the same time. Depending on the project’s needs these functionalities can shorten a projects’ completion time.

The E2 is a User-Friendly Printer

Aaron Winstanely was pleasantly surprised by the extent to which Raise3D made the 3D printing experience user-friendly. For example, when he turned the printer on for the first time, the step-by-step guides helped Aaron set the printer up, insert the filament provided with the E2, and perform initial test prints on the 3D printer. Included with the E2 is a range of tools such as tweezers to snap off support structures and heat-proof gloves for handling the heated build plate safely. This type of attention to the 3D printing experience made it easy for Aaron to set up the printer. Since the printer is easy to operate the school’s Year 6 students can set up and print model files via USB within minutes. Having such a user-friendly printer shortened the learning curve allowing Bolton students to start performing printing tasks quicker.

The E2’s heated build plate allowed Aaron to easily print tall and thin models without them falling, resulting in print failure. When slicing such objects, ideaMaker has always prompted Aaron to add further build plate adhesive structures, such as Raft to enhance the model’s base. When finished printing, the E2’s build plate cools quickly, resulting in the quick and safe removal of the printed parts, without needing the heatproof gloves. 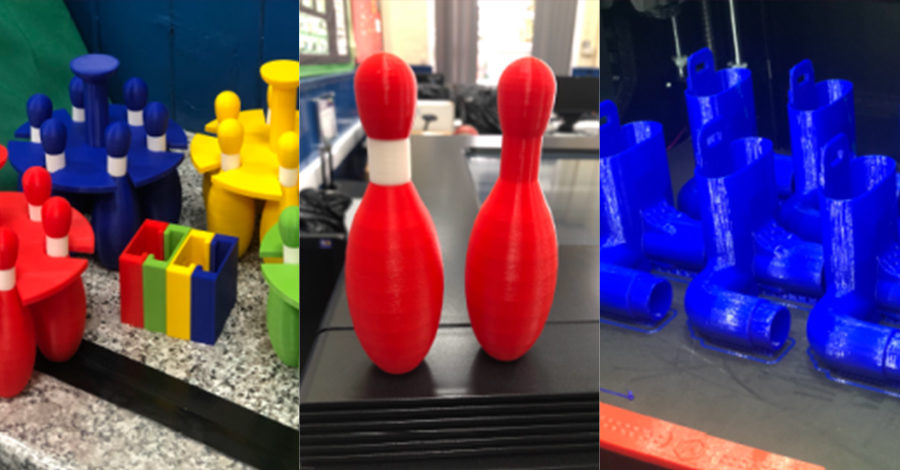 The use of a flexible printing plate allows users to easily remove models.

How the E2 IDEX 3D Printer Impacted Education at Bolton

Aaron arranged different types of printing courses for students of different grades. These courses incorporate knowledge of art, mechanics, and programming, allowing students to understand the principles of 3D printing in the process of personal printing. The E2 IDEX 3D printer was in continuous operation for 8 weeks producing 30-minute prints, and 35-hour prints. Other printing projects included producing parts in one or two colors and parts of different filaments.

Examples of 3D Printing Projects Performed on the E2

Students used a 3D scanner to scan a scarab and print a plastic replica using the E2 IDEX 3D printer. After Grade 4 learned the TinkerCAD unit in the design and technology course, they used TinkerCAD to design a key ring to print on the E2. Both of these projects needed to print out numerous models in a short period. The E2 desktop 3D printer’s maximum printing speed is 150 mm/s making it capable of printing both projects within the time frame. Aaron was impressed by the 30-150 mm/s printing speed of the E2 printer and the accuracy of the estimated time provided by the slicing software ideaMaker. Having such an accurate printing time estimate allows Aaron to arrange printing time according to the course plan. 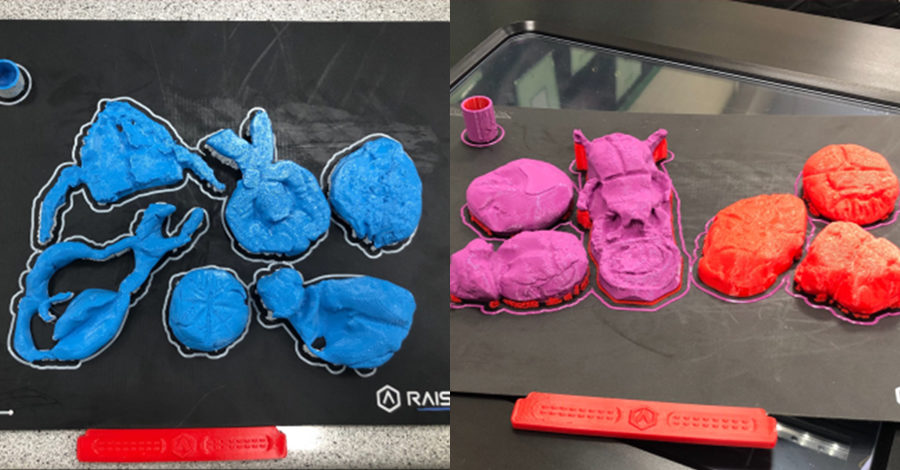 The E2’s Filament Compatibility Allowed Different Projects to be Done

Students in Grade 5 are learning about smart materials in their classes.
Students can print thermochromic filaments to produce products that will change color according to different environments. The E2 supports printing PLA and other biodegradable filaments and filaments such as TPU / TPE / NYLON / reinforced carbon fiber/metal filling/wood filling, which can meet Aaron’s various courses need. 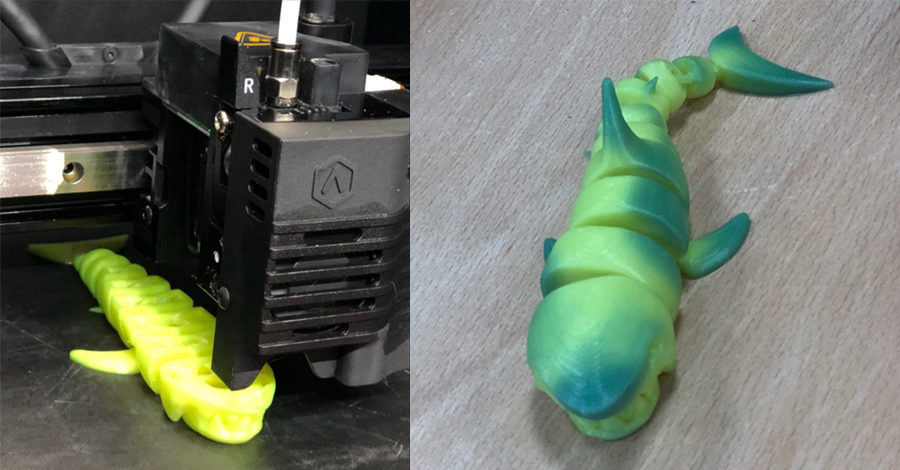 One obstacle that Aaron faced is that it is very difficult for students in the entire class to start printing tasks with multiple printers at the same time. He decided to the best solution was to use RaiseCloud, a cloud-based online print management platform produced by Raise3D that students could use to control the design, slicing and printing of the E2 3D printers from their mobile devices.

The link between RaiseCloud and the printer is simple and straight forward meaning printing can begin quickly as long as students log in to the platform. RaiseCloud itself is user/child friendly, with large and clear icons and buttons. Aaron can distribute printing tasks to each student’s mobile devices online. The available notifications help Grade 6 students pay close attention to the making of their green screen brackets. Even at home, RaiseCloud often prompts students to email their teacher, telling Aaron that the green filaments are used up before the students go to bed. The live camera/time lapse feature of the printer and the application also allows teachers and students to monitor the printing status in real time and save the video of the printing process. 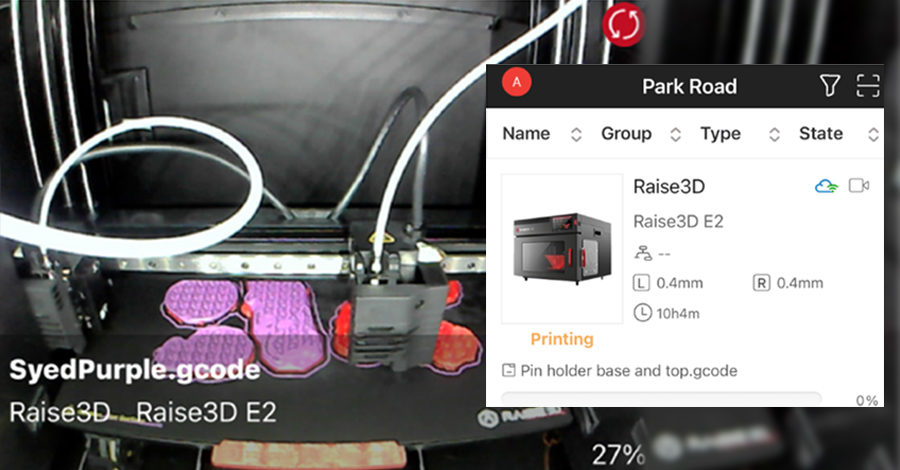 Students can use RaiseCloud to monitor the printing status online.

“Throughout the experience, the quality of every print was second to none.”
–Aaron Winstanley

Every sample Aaron printed on the E2 was of excellent quality in terms of precision, filament performance, and printing success rate. When slicing, Aaron uses a series of different preset slicing profiles, but even after mixing different options, the print quality of E2 remained stable. Aaron used the E2 to print some models with complex curves. When Aaron imports the models into ideaMaker, the system will automatically generate support structures for the models. These support structures are designed to support the model and are easy to remove. After removing the supports, Aaron always gets a smooth contact surface. 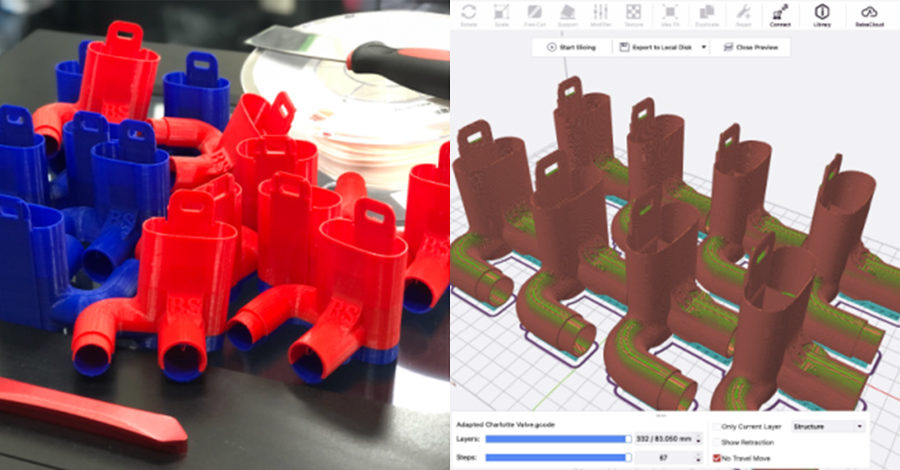 This case is originally posted in: https://www.createeducation.com/blog/bolton-school-raise3d-e2-review/

3D Printing in Medicine: Customized Bolus and Shields For Radiotherapy