“I could 3D print that!” A phrase quite often heard from comic books and movie enthusiasts when Comic-Con is around the corner.  Dressing up as your favorite comic book or movie character for fun is on an upswing. So much so that we now have an official word for it: cosplay (Costume+play). Year after year, Comic-Con attendees as well as the film and entertainment industry, employ additive manufacturing with 3D printing to create life-like costumes and props at a fraction of the cost of traditional production methods.

A Movie Date with 3D Printing

3D printing for props and costuming has almost become an industry standard. With new techniques using 3D scanning as well as mold making through 3D printing, applications in the entertainment industry are endless. When it comes to creativity and design, there is nothing quite like reimagining a character from your favorite movie or comic book. Whether you want to create horns worthy of Maleficent, Avenger Thanus’ light-up gauntlet or an exoskeleton armor worn by Iron Man, these reimagined designs are artistic expressions representing the artist’s personal 3D interpretation of a character.

A unique opportunity has recently presented itself that allows artists to use 3D printing to bring these designs from their imaginations into the real world. And that’s exactly what Sylvain Marty from 3DMakerthings did using our professional large format printer Raise3D Pro2 Plus. 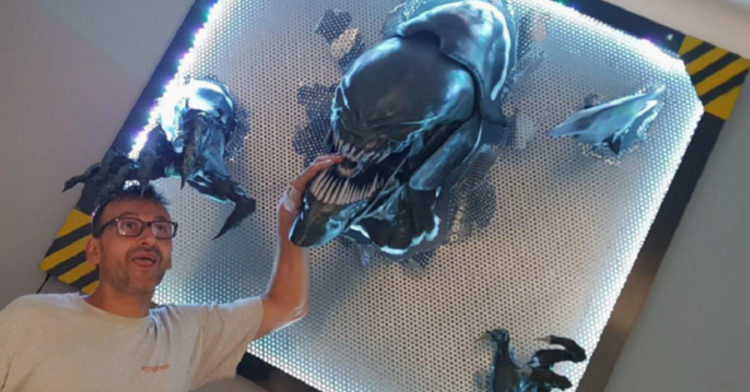 Sylvain creates full-scale models of his designs, bringing the spirit of his imagination to life with detailed precision. By using Raise3D printers, with their extra-large build volume, these life-size designs are printed accurately.

He starts the process by first modeling his design in a 3D modeling software, then uploading to our slicing software, ideaMaker. From there, he’s able to determine the minutiae of the final model by selecting infill density, structural support, size, and all the other details that go along with the creation of 3D models. Once he’s finished slicing the model, he wirelessly uploads the file to the printer, and the printer automatically brings things to life. If, after the first print he needs to create another size or make a small change, the file can be easily modified on ideaMaker and reprinted.

He chose to use Raise3D printers for four main reasons, apart from other technical features of the Pro Series that make them the ideal choice for the entertainment and prop-making industry:

The Pro2 Plus offers a massive enclosed build volume so Sylvain could comfortably accommodate those tall or large replicas or an entire dragon head.

2 extruders make it possible for two colors or materials to be used simultaneously in 3D printing props with supports that are later dissolved or broken away.  Apart from offering an unmatched high-resolution print, this method uses less material and reduces filament wastage.

Raise3D’s patented slicing software is intuitive and easy to use and is considered to be one of the strongest control centers in the 3D printing and additive manufacturing industry. In prop making, your final prints are only as good as your slicing software, for those life-like textural details and smooth finishes.

The Pro2 and Pro 2 Plus beds heat up to scorching 110° Celsius, the nozzle up to 300° Celsius —which offers material compatibility with PLA, ABS, HIPS, PC, TPU, TPE, Nylon, PETG, ASA, and PP. Our Open Filament Program (OFP) is a collaboration between Raise 3D and Filament Manufacturers to identify, test, and select top-performing filaments for Raise3D printers. This helps Sylvain create a variety of functional and high performing prints in a variety of interesting and exotic materials. 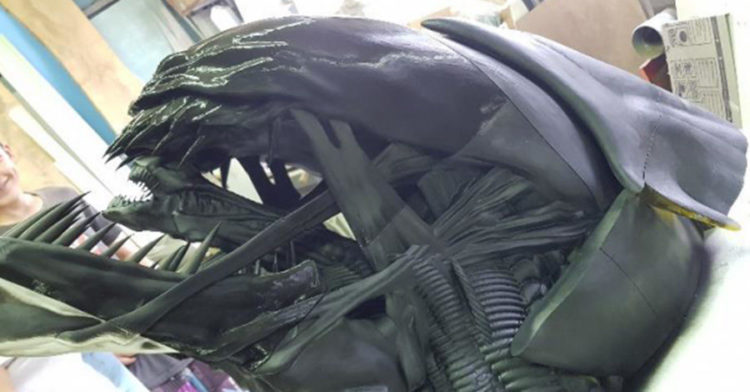 Once the model is finished printing, Sylvain can use his artistic talents again, this time to continue perfecting the model through post-processing. He does this by sanding down the model, then painting it, and finally, adding any other effects he thinks would improve the appearance of the model. In this case, he added LED lighting and put the monster on a mesh metal surface that allows wall-mounting.

A Sophisticated Workhorse Among FFF Printers

The sustained reliability of Raise3D printers has allowed him to continuously print models without having to worry about maintenance or wear on the printer. Using his creative talents combined with the flexible manufacturing provided by Raise3D printers, Sylvain can print limitless models and parts for his designs. Apart from reliability and flexible manufacturing, he’s able to save money by the extremely low costs associated with printing using FFF printers.

Sylvain has been creating projects like this and offering the 3D models to download for free on his website www.3Dmakerthings.com, only taking donations to keep his operations running. The ability to create something and immediately share it with others who can directly recreate the model is one of the cornerstones of using 3D printing. Watch this video of Sylvain’s entire creative process for the life-size Xenomorph Queen using Raise 3D Printers.

3D Printing: A Medium for Artists to Communicate Their Works