Jon Goebel, an Associate Professor of Art at the University of Hawai’I”at Hilo, had an opportunity to collaborate with the university’s marine team to take coral ecology and visualize it in a way that people can understand. The goal was to stimulate conversations about the impact that coral has on the oceans, the different types of coral, and their different sizes.

Benefits of their work can be seen in the example of the e.Mandrinus coral. In this project, John Burns of the marine team, photogrammetry stitched together images of coral from Wayape, in Una, one of the island’s prime snorkeling spots. One of the corals from Wayape is e.Mandrinus, a cauliflower coral. It is about 1 cubic foot (0.028m2) in size, around the size of a milk carton. In 2018, there was a major volcanic eruption, and the kapoho tide pool where the e.Mandrinus coal was native to is now completely filled in.

This project began before the eruption, but the team had specimens from the now filled-in tide pool. John Burns is now preserving the corals in a format where anyone can see them, whether in virtual reality or by using a 3D viewer and rotate them to see what the coral there looked like.

Feeling inspired from this collaboration, Jon Goebel began a project of 3D printing the e.Mandrinus coral to a larger-than-life scale, by printing it 80,000% of its original size.

His goal is to 3D print a large coral model that people will be able to walk through and interact with, giving them the perspective of a coral or a fish in terms of the relationship of scale. He wants his larger-than-life 3D-printed coral to change a person’s perspective of coral in general, sparking curiosity and discussion about the role it plays in the ecosystem.

Using this specific model as a prototype for a much larger version in the future, he is currently up to 6,000 printing hours for his project. His plans for how to one day implement this project on a larger scale include setting up a permanent fixture in public, that would enable children to climb on it and interact with it. 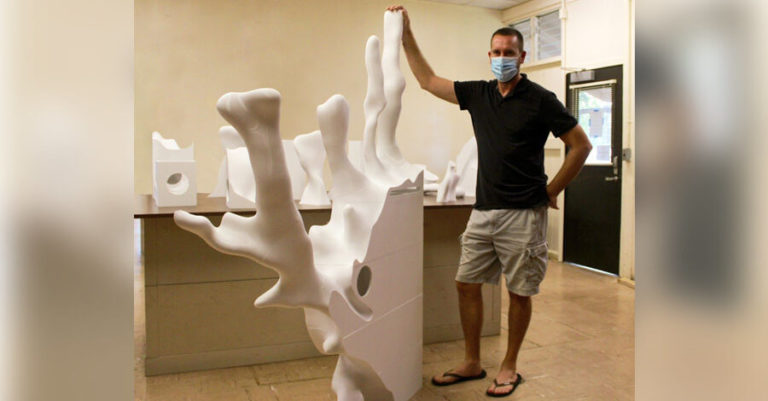 Why the e.Mandrinus Coral was Chosen for the 3D Printing Project

“It was one of the coolest looking corals” was Jon Goebel’s initial reaction. He further explained that this specific coral had the most interesting visual features. For example, it had the most branches on it, the spacing, and the way the lobes undulate added to its appeal. In addition to being visually attractive, its overall structure also gave it the most potential to be interactive when it was enlarged, making it an excellent option for his future plans.

Goebel initially sliced the model that John Burns had photogrammetry stitched together and ran it through the 3D printer. However, he realized that when the model is blown up 80,000% with this process, the final 3D-printed result shows all the faces from the polygons, which does not look good.

New Process for the Coral After Initial Prints

Wanting to improve his 3D printing result, Goebel decided to change the size of the parts he printed. He returned to Burns’ photogrammetry model and cut it into quarters.  He then increased each quarter’s size by 80,000%.

Goebel cut each enlarged quarter into 100-200 pieces, and rematched the surface. He performed a process of smoothing, remeshing and smoothing it again. Goebel did about 10 iterations of this process to get the base count up to 500,000, resulting in a nice, smooth model. He then took the smooth model and reassembled it in mesh mixer to create the whole model. 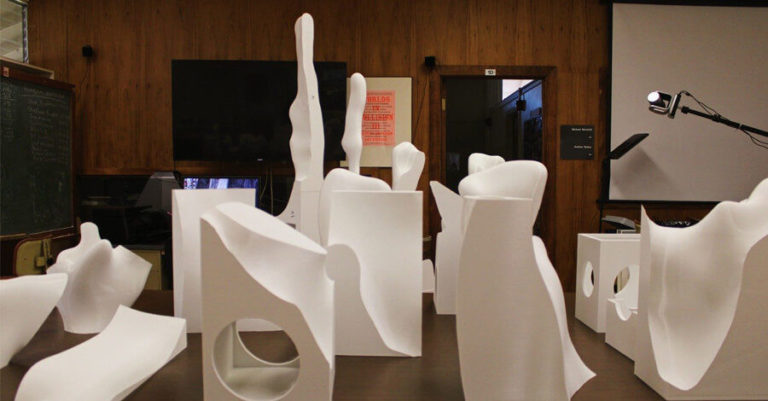 The 3D printed coral parts are heavy, each about 50 pounds (22.6kg), meaning magnets will not be able to hold the different pieces together. Goebel’s engineering solution was to add holes to his parts, enabling him to reach in and add hardware to hold the 3D-printed components together .

To create these access holes, Goebel used Meshmixer to hollow out the model. He learned what the infill for the hollow should be, and made parts with the correct thickness, but also strong and light-weight.

The 3D printer had no issues printing parts with access holes without the use of a support structure. Goebel found that it is possible to produce these shapes as long as they are printed vertically. In fact, it was such a practical design solution that there are no support structures on the majority of Goebel’s project. 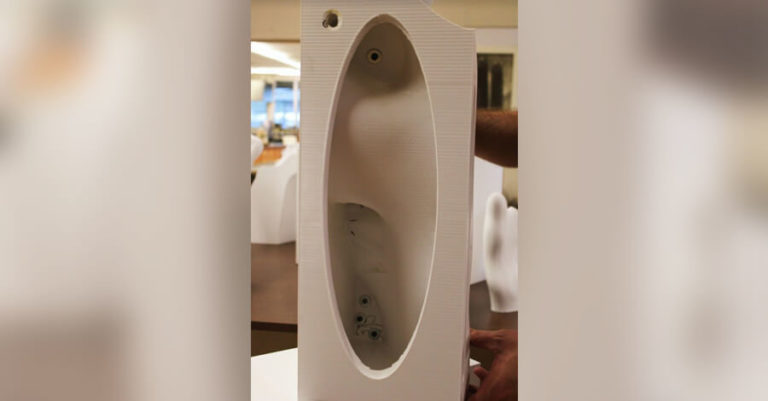 One benefit of the access holes is that they allow Goebel to produce the parts he needs with much less filament. While before he used half a spool of filament for one large part, he can now print 4 or 5 parts with a single spool.

PLA Filament is Used for the 3D Printed Coral

One important reason Goebel chose PLA is because it is a bioplastic, making it a sustainable resource. Since his project aimed at changing people’s perceptions about coral ecology and marine life, having an environmentally-friendly 3D printing material was important. PLA is also a commonly-used, easy to print, and affordable 3D printing material. This gave Goebel the flexibility to fine-tune his structural design in a cost-effective manner during his initial printing run. 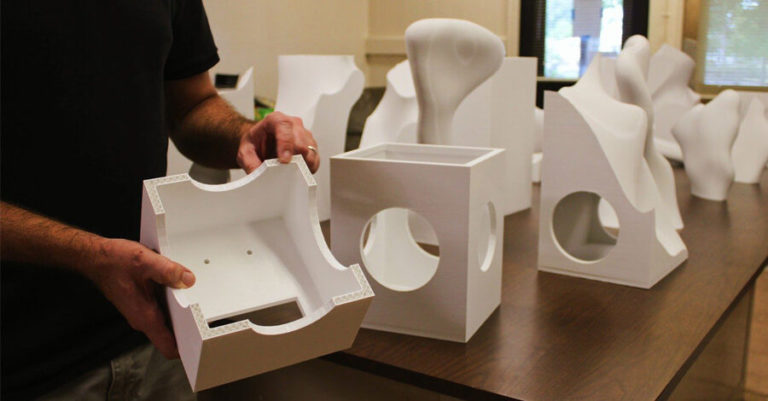 The whole process of Goebel’s project was to print coral that was, as mentioned, larger than life. His 3D printed coral parts are bigger than him. Therefore, he required a 3D printer that could efficiently produce parts at the size he needed. The Pro2 Plus is a large format printer capable of reliably producing high-quality prints with the dimensions Goebel needed. This made the Pro2 Plus the best large format 3D printer within Goebel’s price range.

What is the Process of Installing this Model into its Final Presentation?

“I’ve got 72 pieces behind me, and I think I got 125 to 200 pieces. I still have some ways to go” Goebel stated. The actual assembly process for the final installation will resemble what he is doing now: slicing the model and bolting it together with a quarter-inch zinc steel bolt. All the access holes will allow him to reach inside to bolt the pieces together.

However, to take his 3D printed coral a step further, he envisions taking this current model and individually painting the pieces prior to assembly, followed by performing touch-ups after it is fully put together. He would also like to add texture to make it look like a healthy coral, which, in nature, can be quite colorful and beautiful. 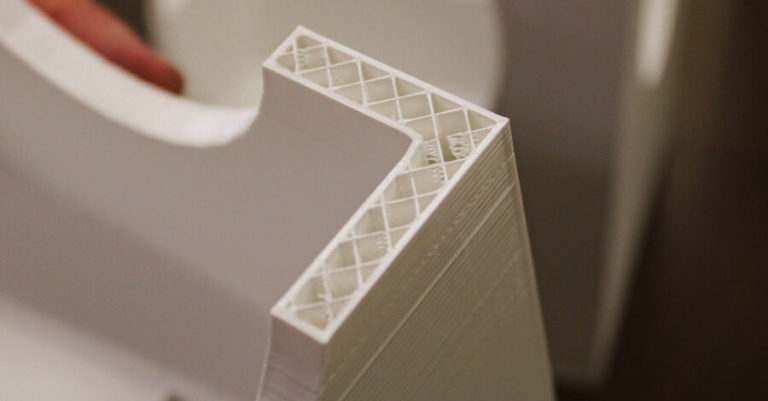 Where Would the Final Home be for this Coral Model?

“The library” Goebel answered emphatically. He explained that in the library people will be able to interact with and get good visibility of this 3D printed model. “We hang up quite a few exhibitions in the library, so we get a lot of foot traffic” he explained.

Goebel is excited to set up in the library and get his project in front of more eyes.